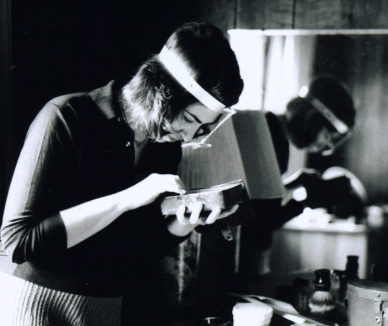 Still performance from Caution, Tamper, Conjure, B&W Film, 2012.
The process of creating mixed media collage is an addictive blend of chance and careful choice. Editing images from collected picture books adds unexpected elements of texture and depth in each piece. While applying techniques such as printmaking, painting, and drawing, blend layers to increase visual complexity. Together these elements are mixed, cropped, and arranged, again and again, in order to fit together like a jigsaw. A completed collage appears in an animated tension between flat and 3D, both a striking silhouette of a new shape, as well as a vibrating form.

A west coast native, Rachel moved across the country to pursue a Masters of Arts in Teaching degree at the Maryland Institute College of Art in Baltimore, MD. Rachel has taught art to a variety of age groups in school settings and art enrichment programs on either coast.  Alongside teaching, she maintains a studio practice, and continues to expand her creative output through other art forms and media. Check out her latest project, Ritual.
Education
2015 MAT, Art K-12, Maryland Institute College of Art, Baltimore, MD
2008 BA, Visual Art and English/Creative Writing, Seattle University, Seattle, WA